The story of Patrick's Challenge

For people who are extraordinarily interested in the 1990s indie game scene, here's a writeup on how and why I decided to create an 8-bit version of an obscure freeware game for Windows 98 for a cyberpunk-themed game jam.

As an incentive, I'll let you know that you'll learn how to access an easter egg in Patrick's Cyberpunk Challenge in the following article!

I'm always looking for new game jams to join so I can became a better game developer, and since I'm a bad game developer, I decided to join the "So bad it's good" jam. I opened up PICO-8, my go-to jam platform and tried to think of ideas. The late Troy Scott alias Reldni Productions is the epitome of "so bad it's good" in video games to me, and I immediately thought of adapting one of his games to PICO-8.

Now, if you're not familiar with Reldni's work, which you're probably not because they just made a few obscure freeware titles in the late 90s, you should definitely check out this let's play of a great gem called Vinnie's Tomb. Vinnie's Tomb Chapter One and it's sequel, Vinnie's Tomb Chapter Two – Shine and Glow Vinnie, are Reldni's most well-known (as it is) games, and have becomevery minor cult classic.

Patrick's Challenge II is one of Reldni's more forgettable titles, a freeware Windows game from 1998. It's a very simple puzzle game; perfect to implement in a jam. It's very easy, with a repetitive and boring gameplay, but still fun and unique. A perfect fit for this jam, I thought.

However, the theme for this year's jam was "Cyberpunk". How do you make a bland puzzle game like this fit that theme?

I'm not sure what's cyberpunk aesthetics and what's vaporwave nowadays, but neon is cyberpunk, right? The neon balls that are spread around the puzzles seemed like they could work on a darker background.

I also thought of the classic 80's pink grid horizon, and decided to make the puzzle grid pink. This fit very well with the limited PICO-8 palette, as it turned out. Since a Patrick puzzle can have colored balls on it in yellow, green, blue, red, dark blue and orange, there aren't too many colors left to use for the UI without things getting very messy. The colors that are left are pink, purple, violet, light gray, dark gray, and two skin colors. A pink grid it is, with purple squares. Light and dark gray for UI highlights.

There's also dark green in the palette, but that would clash with the light green ball, so I didn't want to use that. Patrick is green in the original game, but the cyberpunk theme allowed me to make him a somber dark gray instead in order to not re-use any of the ball colors for anything else (except for his yellow skin color, which I didn't feel I could change).

The original Patrick's Challenge games don't have a story, but in true Reldni fashion there is some obscure lore. You play as Patrick Magee, a chipper leprechaun whose life story was chronicled in the song "The Ballad of Pat Magee" on the Reldni cassette tape The Running Away Sessions from 1991.

However, aside from starring in the Patrick's Challenge games, Patrick was supposed to appear in Vinnie's Tomb Chapter Three as a supporting character, in what would have been the most ambitious crossover event in history. 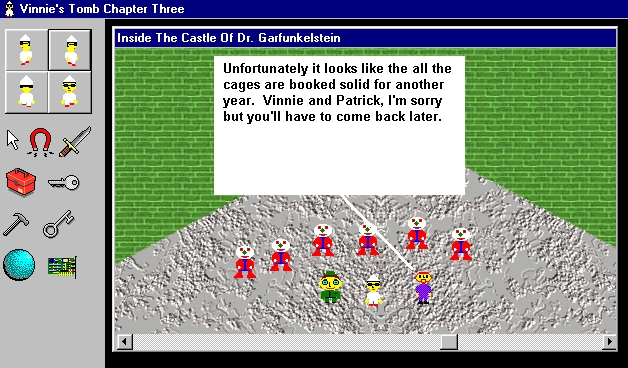 Unfortunately, Vinnie's Tomb Chapter Three, originally slated for a 2000 release, would end up never coming out before Troy Scott's untimely death. However, taking it as canonical fact that they exist in the same universe made it possible for me to draw from the wider Reldni lore and create a cyberpunk-themed backstory for the game by having it take place decades after the events of Vinnie's Tomb.

I wrote a short and silly plot, set in a future where Vinnie failed in his quest to stop the evil Ernie York and the Sinister Zebra Committee (now a megacorporation). That seemed fitting, since we actually do live in a world where Vinnie's Tomb Chapter Three was never released. I made a scrolling recap of this plot in the rain, which made me think of the opening of the great cyberpunk movie Blade Runner, so I added in a bit with the "tomb bots" pictured in the screenshot above as a spoof on replicants. (No tomb bots actually appear in this game.)

I have no idea how to make music, let alone synthwave music and other genres with cyberpunk atmosphere. Troy Scott of Reldni Productions knew how to make music, though. He recorded several albums, and his games are full of ditty little tunes, but also somber background music like Vinnie's Tomb's main theme.

I love that theme so much. It's great. I listen to it once in a while, and get sad that Troy Scott is no longer with us. I figured that if I imported that song (which luckily came in MIDI format) into PICO-8 and replaced the instrument to sound more like the ending theme of Blade Runner, I'd have a Reldni cyberpunk theme song on my hands.

There are two tools I've found for converting MIDI to PICO-8 music: "midi-to-pico" and "midi2pico". I picked the former. It converted the song, but failed horribly. The result was very janky, it didn't even sound like the original, and it took up all the precious SFX and music track slots in my game, so that I had to use parts of the song as sound effects. The song did, however, sound more cyberpunk than the original. All in all perfect for a "So bad it's good" game!

(Afterwards, I tried to give the MIDI a go with "midi2pico" instead, which created a perfect conversion of the song. I recommend that tool for any PICO-8 developers reading this.)

Patrick's Challenge isn't actually a very challenging game. The randomized puzzles keep things fresh, and chasing a high score keeps you playing, but it's never too hard. How would it even be made harder? In the original Patrick's Challenge, puzzles could actually have missing squares, as seen here (also of note is the fact that there were just four ball colors, and the red ball removed all surrounding squares):

However, that often generated unsolvable puzzles, and making sure every puzzle was solvable sounded like too much work.

Another way could be to remove the UI hints, such as:

I could have made options for these things, but it's much more fun to present them as glitches, because that's what they sound like and it would fit with the cyberpunk theme. So I added a kill screen to the game, Pac-Man style. If you're a dedicated player who's chasing the high scores, you just might suddenly find the game a bit more challenging when you reach level number 128, at which point I decided it would make sense for an integer overflow to occur on the PICO-8, which has a 128x128 resolution. 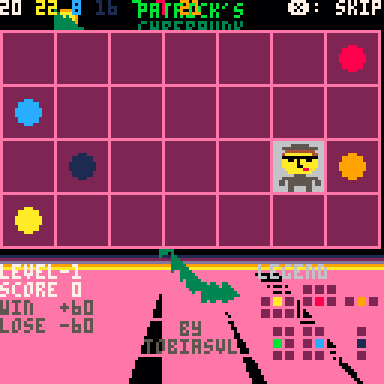 This also let me put some well-hidden secrets and references to Reldni lore in the game, just like Reldni themselves did in the Vinnie's Tomb games. And most probably, nobody will ever find these secrets, just like in Reldni's own games. I'll say this: There's a way to trigger the kill screen on the title screen of the game, in a way that references a secret in Vinnie's Tomb Chapter One. This lets you explore the game in glitched mode. Who knows what you'll see in that digital Mirkwood.

So, that's how I co-opted a bland and forgotten 90s freeware game by a deceased indie game developer hero of mine to be a cyberpunk-themed entry in a "so bad it's good" jam.

If you found the story of Reldni Productions and Vinnie's Tomb interesting, feel free to check out my Reldni Productions Restoration Project and the Reldni wiki, a humble attempt at cataloguing Troy Scott's artistic output – video games, music, audio plays, and more – so it's not gone forever in the depths of time.

Are you ready for the challenge?​​