This is a version of Joseph Weisbecker's game Think-a-Dot (1965) aka. Flip (1974) implemented in Weisbecker's own CHIP-8 language for the COSMAC VIP computer (1977) he designed while at RCA.

Read the manual for Think-a-Dot here.

Press 1, 2 or 3 to drop a marble into the respective hole. The marble will move through the flip-flops, moving either left or right at each one depending on its state, flipping the ones it hits before popping out on the bottom. Play around with it on the title screen to get a feel for how it works, or make up your own game around its rules.

You can always press 4 to reset back to the starting layout.

Press any of the following keys to generate a random goal pattern, displayed to the right:

You can also play with a friend. Choose who goes first, player 1 or player 2; after that, you can continue dropping the marble as long as the marble comes out on your side (watch the arrows at the bottom). Your goal patterns are inverts of each other.

For convenience, start playing by pressing any of the following keys to display both patterns:

In 1965, Joseph A. Weisbecker invented an educational mechanical toy computer called the Think-a-Dot, which was manufactured by E.S.R., Inc. In 1974, Weisbecker detailed a design for an electronic CMOS computer version of the game, called Flip, in the magazine Popular Electronics. In 1977, Weisbecker's simple programming language CHIP-8 was introduced for RCA's COSMAC VIP microcomputer, which was also based on his designs. Read more in The Sarnoff Collection's article on Think-a-Dot.

Think-a-Dot was covered in Mathematics Magazine in 1967, 1973 and 1979. The game has some interesting characteristics. For example, as proven by Benjamin L. Schwartz in his paper "Mathematical Theory of Think-A-Dot" published in Mathematics Magazine, Vol. 40, No. 4 (Sep., 1967): When playing Think-A-Dot, it's impossible to flip an even number of spots. Try it yourself! No wonder: It always flips one spot in both the top and bottom row. This of course means that if your starting pattern has an even number of flipped spots in those two rows, you can never reach a pattern with an odd number of flipped spots – and vice versa. In computing, we say that you can't change the pattern's parity.

This also means that from the default starting position, only half of the possible patterns can be reached. Interestingly, this includes inverting the default pattern, since the total number of spots in the top and bottom rows is even (6).

FLIP-8 takes this limitation into account when generating random goal patterns: Any pattern you get can always be solved. You can also randomize the starting pattern completely, gaining access to the other half of the possible goal patterns.

You can read more about the mathematics behind the game on Jaap's Puzzle Page on Think-a-Dot. 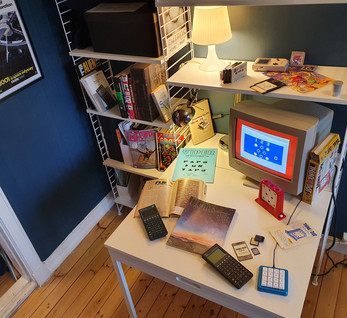 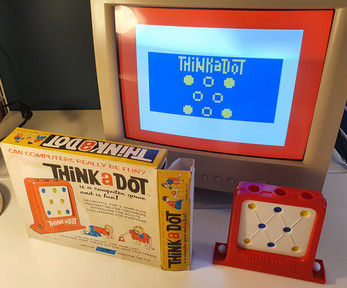 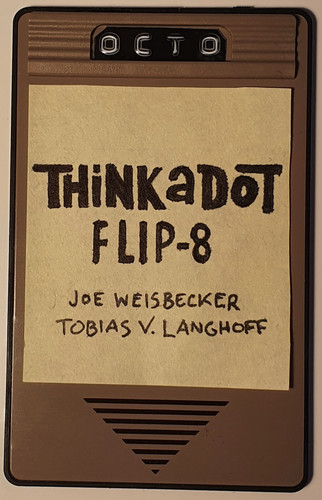